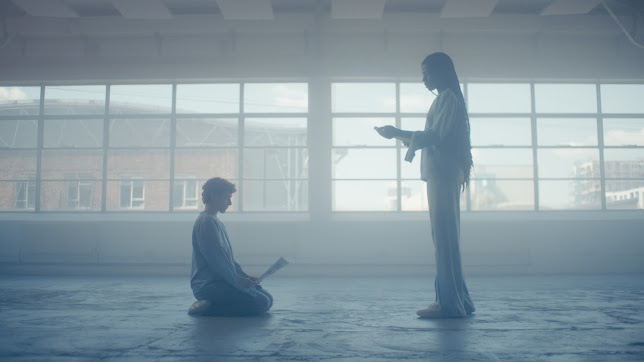 TristxtOTL is a melancholic science-fiction film exploring sadness and grief as instruments for transformation and imaginative thinking. A desolate speech is being rehearsed and delivered at the very same time, a stone becomes the physical manifestation of despair, heavy arms fall to the rhythm of anxiety, while an empty space is incessantly hunted by intrusive blue thoughts. Starring performers Fionnuala Kennedy and Ebun Sodipo, the film embarks on a gentle exchange that depicts the grieving body as a collaborator, one that instills empathy and receptivity within a viewing audience by mixing dejection with imagination. Drawing on a multitude of literary and scientific references, this sad sci-fi drama aims to reimagine sorrow as a capable force that can be reassembled and mobilized in order to produce cognitive change; a coping mechanism, whose resignation and paralysis are its best strategies in resisting an impatient reality.